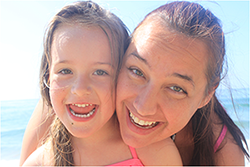 Erica Bland is a speech therapist with a Master’s degree in Speech Pathology and Audiology. As a speech therapist, and previously as a special educator and in-home behavioral therapist, Erica has worked with a range of students with learning differences including students on the autism spectrum. She attributes her interest in helping children with special needs improve their communication to her experiences with her younger brother, who had difficulty developing speech until he was three. Erica lives with her husband and two children in Alameda, California.

A couple of years ago, Erica noticed that she often made up songs to help her preschoolers understand concepts that she was teaching. She got feedback from parents and noticed that the children she worked with would often memorize and sing the songs she introduced. She realized that with some polishing, she could share this approach well beyond her students.

As a lifelong music fan, Erica wanted the Friend Ship not only to be useful, but to be cool and interesting for parents, therapists and teachers. She knew that she needed professional help. Through friends, Erica was introduced to David “Turtle” Ramani, an experienced Los Angeles session musician and children's songwriter who also produces a great deal of music for films and television.

David and Erica quickly found that they were on the same page creatively and excited about making children's music that would serve a purpose and appeal to adults. David composed and performed the music for the Friend Ship at his studio in Venice, California. Wendy Violet, Turtle’s partner, performed most of the lead vocals. The two can be seen live with their rock band, Dirty Birdy.

The official launch of The Friend Ship is at the Preschool Fair in Oakland, California!

Physical copies of The Friend Ship are being produced starting today!

The final studio cuts of the CD have been digitally mastered and ready for production!